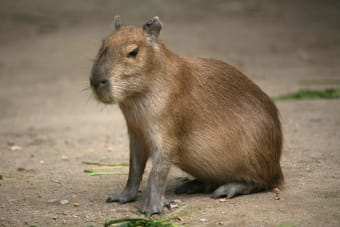 Exotic pets have been growing in popularity across the country. Today, our Hopkinsville vets have developed a list providing information on some of the best exotic pets for your home.

Exotic pets is a pretty broad term considering not all of these "pets" are legal to own. Some of these exotic pets may not be legal to own where you live (varies by state or country) and have very specific care and behavior requirements that make it difficult to keep them happy and healthy.

Before you even start thinking about what type of exotic pet you would like, a lot of research must be done in advance. To help get you started, the following list of exotic pets has some of the best exotic pets that are legal to own (not necessarily in every state in America).

Originating from Australia, the bearded dragon has become a fairly common exotic pet within North America. Parents have been known to give bearded dragons to their children as a first pets due to their relaxed nature and because they are quite easy to take care of.

They can grow to be up to two feet long, so you will need to have a good amount of space for the relatively large enclosure they require. They also require a hot area (around 100 degrees Fahrenheit) and a cooler area (between 80 and 90 degrees Fahrenheit) in their enclosure, allowing the temperature to drop to about 75 degrees Fahrenheit during the night. Although they do love to be held and handled, it is still a good idea to wash your hands afterward. All reptiles have the potential of carrying and spreading salmonella.

The Capybara is one of the largest rodents in the world and can weigh up to 140 pounds. They are semi-aquatic animals, So they will need to have some sort of water source available for them to swim.

Capybaras are extremely social creatures and are almost always in groups in the wild. Because of this, you probably should avoid just getting one as they will need a companion. Although they are quite cute and generally rather sweet, they can get difficult to own as a pet if you aren't able to keep them happy.

The Fennec Fox is the smallest fox in the world, originating from Africa. They are growing in popularity due to their behavioral similarities to a dog or cat, which makes them an ideal pet for someone who wants a pet that is out of the norm. This species only reaches about four pounds even when fully grown, but is still very playful and full of energy while also being happy being left to its own devices.

These pets, however, are quite difficult to obtain and can be very pricey. They do live between 10 and 15 years so the price may be worth it if you can commit.

This is another social pet that would highly benefit from having a second sugar glider in their environment if you were to be interested in one. When properly socialized, sugar gliders are great, loyal companions and can be very affectionate. However, they are rather messy and can be very difficult to house-train.

These adorable creatures are often referred to as "mini kangaroos" due to their uncanny resemblance to the fellow marsupial. Like the kangaroo, the wallaby is only found naturally in Australia, but unlike regular kangaroos, they are also native to Papua New Guinea. Wallaby can now be seen in specific states around the United States as rare house pets.

Wallabies are extremely difficult to care for and will require a lot of research before purchasing one. With these creatures being truly exotic, you should look into wallaby behavior, diet, the ability for veterinary care in your area as well as housing habits just as a start. They also require ample outdoor space so you may require a license in your state to own a wallaby.

Think Before You Buy

There is certainly a definite appeal to owning exotic pets as people often like the idea of owning something atypical that not many people will have. However, a lot of research should be done before bringing home your pet. Failing to do so may put the animal's health and safety at risk, and they can also be a danger to you and your family. Be sure to also contact your state, city,  and vet to ensure there will not be any issues in acquiring your exotic pet.

Are you considering adding an exotic pet to the family? Contact our Hopkinsville vets for helping finding the right companion for you.

Skyline Animal Clinic is accepting new patients! Our experienced vets are passionate about the health of Hopkinsville companion animals. Get in touch today to book your pet's first appointment.